We are almost there! 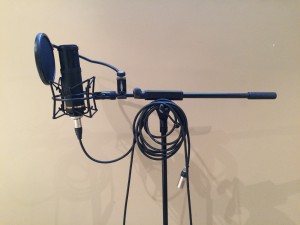 Every sounds has been recorded with a condenser microphone. The menu system is working (finally). The game is operational for iOS devices.

Let’s go into the cave! In the following video, you will see how Very Naughty Bat will finally look like. Please don’t pay attention to the annoying sounds: they just help for the development but they will not sound the same for the final product (of course). On the other hand, you can already listen to the ambience sound.
https://www.youtube.com/watch?v=k9weHcZ4sOk
The animations have been realised with the Unity Animator Tool and are controlled with the code.

The programming part is almost completely done. We still have to create a script to control the bat and to create traditional menu such as main menu and game over. In the meantime, I brought some screenshots of bat drawings to kids (9 to 12 years old) in a tennis club in order to analyse what our target audience likes. Surprisingly, kids are quite hard to please! The bat has to be funny but realistic enough as well. After their feedback, the design of the bat and the obstacles finally looks like this: 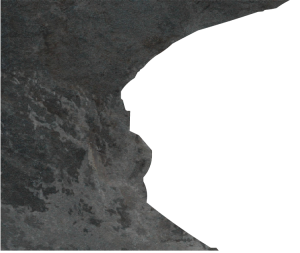 All these sprites have been made with Adobe Flash and Adobe Photoshop. 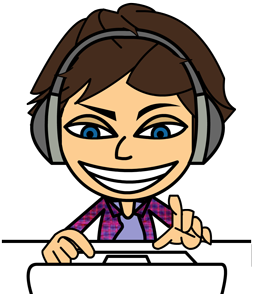 It’s working! The most technical part of the development is finally done.

As you can see and hear on the upon video, an obstacle is displayed after a sound has been played. The position of the obstacle depends on the stereo behaviour of the sound. In other words, 3 different kinds of obstacles (left, center or right) randomly appear one by one and the only way to anticipate them is by listening to their respective sounds (left, center or right).

Well… Still fighting. The good news is that they are fewer errors than before. 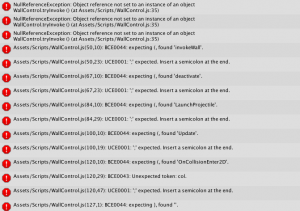 Most of the time, is just a problem of syntax but the pseudocode logic still seems to be efficient.

Now the goal is to translate our pseudocode into Javascript in order to control game objects with Unity 5 (cross-platform game engine). The code lines on the following photo are not completely correct but they still reflect our pseudocode logic with a scripting language syntax: 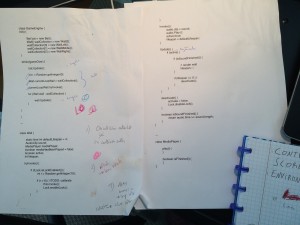 By the way, JavaScript is a dynamic programming language. It is most commonly used as part of web browsers, whose implementations allow client-side scripts to interact with the user, control the browser, communicate asynchronously, and alter the document content that is displayed. JavaScript is also considered an “assembly language of the web” for making client side web applications, using other programming languages, supported by all the major browsers without plug-ins.

The most difficult part of the development will definitely be the game engine because the gameplay of Very Naughty Bat is unique and cannot be found as a template in any kind of programming language. This is why, as they do in professional field, we need to establish a “Pseudocode”. 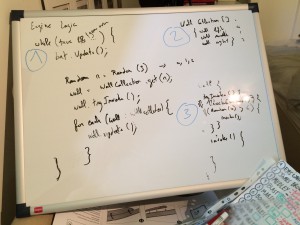 A Pseudocode is an informal high-level description of the operating principle of a computer program or other algorithm.

It uses the structural conventions of a programming language, but is intended for human reading rather than machine reading. Pseudocode typically omits details that are essential for machine understanding of the algorithm, such as variable declarations, system-specific code and some subroutines. The programming language is augmented with natural language description details, where convenient, or with compact mathematical notation.

The purpose of using pseudocode is that it is easier for people to understand than conventional programming language code, and that it is an efficient and environment-independent description of the key principles of an algorithm. It is commonly used in textbooks and scientific publications that are documenting various algorithms, and also in planning of computer program development, for sketching out the structure of the program before the actual coding takes place. 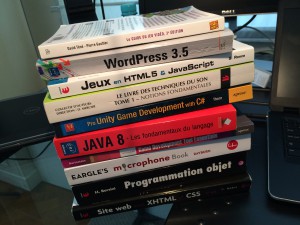 This week, the goal is to gain experience in:

The final major project will consist on developing Very Naughty Bat, which is a video game for mobile devices. The main concept of the game is to experiment echolocation. Echolocation, also called bio sonar, is the biological sonar used by several kinds of animals (e.g. bat, whales, dolphins). Echolocating animals emit calls out to the environment and listen to the echoes of those calls that return from various objects near them.

The gameplay consists in playing a flying bat into a completely dark cave. The bat is moving forward and thus gives an illusion of 3D environment (even if the game engine is in 2D).

The objective is to go as far as possible. The player will be aware of how many meters he traveled and he will also be able to progressively move the bat to the left or to the right. On its journey, the bat will have to avoid obstacles that sometimes appear on the left, in the center or on the right.

The original concept of Very Naughty Bat resides in the fact that the player doesn’t see the obstacles, but he can anticipate them by listening to sonic information that are spatially spread in stereo. However, when an obstacle reaches the position of the bat, this obstacle will be visible for a few frames. These sudden appearances provide more sensations to the player as he may be surprised.